Yasumi Davis, Broker/Owner of Help-U-Sell Golden Homes in Martinez,California, originally came to the United States as a young woman in 1990 to attend graduate school on a Rotary scholarship to complete her 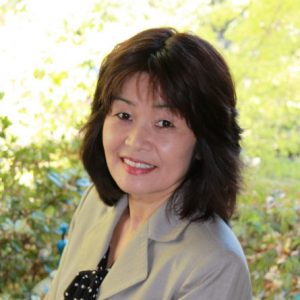 MBA. Upon completing her studies, she was planning on returning to her home in Matsumoto, Japan, when she met her future husband, William, leading to her work for a high-tech software company as a project manager. However, without an engineering background, she didn’t think the industry was the right fit for her. In 2003, the high-tech industry was not doing so well either, and in a third round of layoffs at her company, Yasumi found herself without a job.

The year previous, Yasumi and William had purchased their first home together. She paid careful attention to the entire process and thought real estate seemed like a really good fit for her, so she pursued her real estate license. William is an attorney who concentrates on tax and real estate law, so they decided to share an office. “I was a little worried when we first started sharing an office that it might not be a good idea, but we quickly found our work schedules didn’t interfere with one another at all,” Yasumi said. In 2003, after looking around at various options, Yasumi and William purchased a Help-U-Sell franchise.

Last year, Yasumi wanted to take her business to the next level and became involved with the coaching groups at Help-U-Sell Real Estate. “Before I started coaching, I was just by myself figuring out ways to improve and better organize on my own. Since I made it a part of my weekly routine, I feel connected to everyone, and the ideas shared have helped me streamline things I do every day. Also, the motivation is a real boost.”

“In recent years, our housing market has tended toward a higher median price range, usually between $650,000 – $700,000. With the market inventory being tighter this year, it’s getting more common to see million dollar homes,” Yasumi said. “However, if I can get a listing presentation, I’m going to get the business. There may be competitors out there, but I don’t worry too much about them because I’m offering negotiation skills, the experience of having sold a large number of homes, and evidence of the thousands and thousands of dollars I have saved home sellers over time. What I do is get homes sold.”

In fact, Yasumi has been so busy selling homes that she ranked 17th out of 3,800 agents last year in the Contra Costa Association of Realtors. She has an assistant who is helping with the marketing efforts, such as the new updated Automated Arounds postcard program, which makes it easier than ever to set a budget and pinpoint an audience with the right message at the right time. She is also getting ready to train a new transaction coordinator and a buyer’s agent. “I am at maximum capacity in terms of how busy I am, so it’s really time for me to start delegating tasks to other people,” Yasumi shared. “I am trying to eventually set this office infrastructure up so that I can leave it in capable hands to run on my behalf.”

Part of that desire to expand the number of people in the office is so that she can visit her family in Japan more frequently and spend more time focusing on her 11-year-old twins, a daughter and a son. Both children are avid baseball players, and both often play the shortstop position, making the All -Star team. Shortstop is often considered the most hard-working position in baseball, so it came as no surprise to us that Yasumi’s children take after their mom by excelling in the position that requires fast thinking and covering a lot of ground.