Before deciding to start Help-U-Sell Real Estate Specialists, Michelle Morgan was managing a French bakery and cafe, and then segued into retail management, hoping it would be less demanding and stressful. “I was married to those jobs, but when I became pregnant, I looked at getting into real estate because it was something I could do from home,” Michelle shared.

She learned the ropes with a traditional style office in San Clemente, California, and later was asked to join a real estate office that had a flat fee model. Michelle bought her first Help-U-Sell franchise office from another Help-U-Sell Broker/Owner who was leaving real estate, and stayed in California for a few more years, until trading her California location for Lake Havasu City, Arizona, in 2005.

While the first few years of operation were normal, by 2008 Lake Havasu City was looking like the rest of the country during the economic crisis and beset by foreclosures. What made Lake Havasu a bit different from other cities experiencing the depression is the designation as a resort town. “A lot of the homes here are second homes for people,” Michelle remembered, “I became really good at doing short sales to keep the business going and got good enough where other agents were referring the short sale business to me. The downside of short sales is that the paperwork took forever, sometimes upwards of a year because banks were still faxing the documents then, and there would be hold ups due to incomplete transmissions or people would say they didn’t receive it. You’re talking about over 100 pages before they embraced sites where you could upload and email the documents. It was a ton of work but it was the only way to survive.”

By 2013, the economic recovery had started and there were many people who still had marginal equity in their homes, but the popularity of the Help-U-Sell model was still going strong for Michelle regardless of the short sales aspect of business coming to a close.

To keep her business in the forefront, Michelle uses a lot of Help-U-Sell’s “Just sold” marketing, which heavily features the “sold and saved” concept popular among Help-U-Sell Broker Owners. She also advertises in a local publication called “The White Sheet”, which gets her a lot of traction, as well as leads from realtor.com. While there are three total licensed agents in Michelle’s office, one focuses on property management to round out Michelle’s total customer offerings.

“I’d say that because of the name recognition, in combination with the great service me and my team provide, a large portion of our business comes from repeat clients and referrals from past clients. That’s what you work hard for – building trust and a great reputation in your community where people recognize your brand and what it stands for so they feel comfortable coming to you with their real estate needs,” Michelle added, “The rest is just putting in the work!” 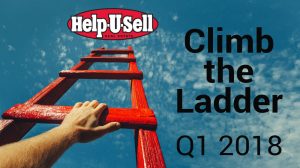 It’s no surprise that Help-U-Sell Honolulu Properties is making the top of the list again. Richard Cricchio and his team are really having a tremendous start to 2018.

Patrick Wood and his Help-U-Sell Prestige Team also are having a great first quarter, along with Jack Bailey of Help-U-Sell Greensboro, and Mario Ferrante at Help-U-Sell Metropolitan. Congratulations to everyone in our top…eleven! Thanks to a three-way tie .

We have also ranked our office by gross sales volume. Many of our offices from the usual ranking also make a place here, but we’d like to take a moment to congratulate David Bartels and the team at Help-U-Sell Full Service Realty for ranking in the top three this quarter! 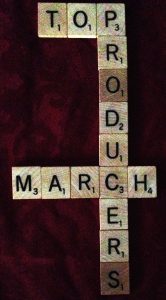 March was such a robust turnout for home sales that we have three offices each tying for third, fifth and sixth places, making it impossible to have just a normal “top ten” for last month. This month, we’re bringing you the “Top 12” in Total Sales. Congratulations once again to Richard Cricchio at Help-U-Sell Honolulu Properties for making it to the top of our list. Mario Ferrante at Help-U-Sell Metropolitan also finished strong in March with 15 total sales.

Additionally, we are introducing a new type of Top Ten list based on gross sales volume, and thus putting a spotlight on a completely different take on other top performers in the Help-U-Sell family. While Richard Cricchio tops this list as well (!), we’re also seeing impressive results from Patrick Wood at Help-U-Sell Prestige Properties, Marc Dosik at Help-U-Sell Federal City Realty, and Dave Bartels at Help-U-Sell Full Service Realty.

Congratulations to everyone for their success.

Gene Manners spent the first part of his career teaching music at the university level and performing as a tenor when he decided to branch out into real estate for the first time. He acquired his real estate agent license in 1985, and then just a few years later went for a broker’s license in 1988.

After having met a representative of the Help-U-Sell Real Estate organization in 2001, Gene shared, “I told him that I had two problems. One, I have very little experience. Two, I don’t have any money.” Gene then heard: “You’re just the kind of person we’re looking for.”

Gene bought a franchise office in West Covina, California, on the outskirts of Los Angeles. He made the kind of sacrifices that are well known to anyone who has tried to rally an entrepreneurial effort into a profitable business. He put in long hours and worked out of a spare bedroom in his mother’s house for the first year.

“I always believed that if you worked hard, were unassuming, and approached everything from the standpoint of genuinely wanting to help people, you would do well,” Gene explained. “My goals, my company’s goals, and my clients’ goals must always be in harmony with each other. I never want to be in a situation where people were being taken advantage of. I’ve told people when a deal was wrong for them or not in their favor, and walked away from it rather than participate in it.”

Being a trustworthy Broker has not just earned Gene Manners a great reputation, it has earned him a lot of repeat business as well, and a nice stream of referrals from friends of those repeat clients over time. “The real estate market in Los Angeles has always been a bit of an anomaly because housing prices stay inflated, and people have a tendency to stay in their homes a lot longer. So marketing requires a much more personal effort here, and I would say the bulk of our new contacts and leads come from open houses,” Gene said.

Gene also appreciates the coaching groups that are a hallmark of the Help-U-Sell business model. “The main benefit of attending the coaching groups for me is the chance to listen to what other owners are doing in their respective markets, and find out more about what efforts are working for them and what isn’t. It also helps me to keep abreast of changes in the industry and how those changes are affecting us individually and as a company.”

When the economic crash in 2008 started unraveling and affecting commerce and people everywhere, Gene and his wife Ruby managed to hold on to the business. “Of course activity was very slow, but we continued to work hard and pray hard until the market turned around,” Gene said. “When things eventually improved, we knew we did the right thing were joyful and thankful. A big part of that thankfulness was to the Help-U-Sell management which was always there for us like a champ.”

Although Gene has never owned another business besides Help-U-Sell, he still did due diligence and researched his choice. “There are a lot of companies that always have their hands out or are not reputable. From where I stand, there can’t possibly be anything as good as Help-U-Sell Real Estate. The startup costs are reasonable, the support and tools provided to the new offices are outstanding, and the dedication of both the parent company and fellow franchise owners is beyond compare. I’ve always been very pleased with the support and dedication I have received.”

Which is, of course, music to our ears. 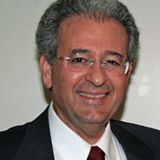 Taking a look at our results in February, love must have surely been in the air seeing how our offices soared to new heights!

1) Riding the wave way up high is Help-U-Sell Honolulu Properties completing the month with a total of 19 closings, five on the buyer and fourteen on the seller sides.

2) A very strong second place goes to  Help-U-Sell Triad Realty  with 16 closings, seven on the buyer and nine on the seller sides.

3) In third place was  Help-U-Sell Direct Savings with a total of 12 closings, three on the buyer and nine on the seller sides.

Well done to all our offices on these terrific results and let’s keep up the great work!